We Got the Meaning of the War Wrong 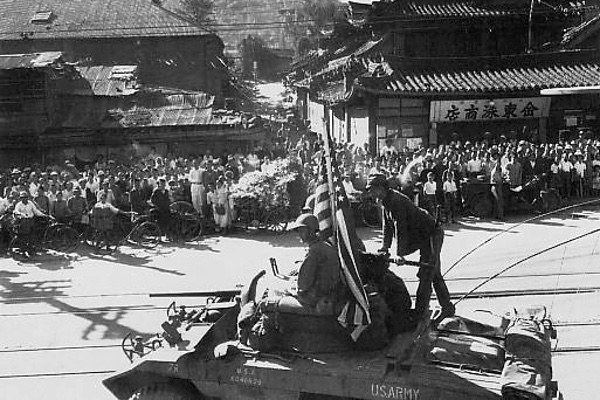 On the 65th Anniversary of the Korean War, It’s Worth Noting This: We Got the Meaning of the War Wrong
Sixty-five years ago this month, the Korean War broke out. With this war as a turning point, the Cold War entered an entirely new phase in the year of 1950. When saying this, I often encounter two reactions: one positively affirming the statement with reference to the drastic militarization of the Cold War during the Korean War, and the other more skeptical, pointing out that tension between the United States and the Soviet Union was already on the rise due to decisive events in Europe. Neither of these, however, is my point. What I question in my recent book, Cold War Crucible: The Korean Conflict and the Postwar World (Harvard University Press, 2015), is actually an assumption that these two seemingly opposing opinions share and that goes unquestioned by them: that is, that the essence of the Cold War was the US-USSR confrontation.

Indeed, our commonsense knowledge tells us that the Cold War was a war short of open warfare between the two superpowers in the postwar era. However, when I say that the Korean War was the crucible of the Cold War, I mean that we should broaden our understanding of it. The moment of the Korean War is worth reexamining not just because of the intensification of existing trends, but because we can see a metamorphosis in the very nature of the Cold War. At the time of the Korean War, the Cold War transformed from discourse among policymakers to a war among ordinary people, and from a diplomatic stand-off in Europe to a gigantic social mechanism that operated in many parts of the world to tranquilize chaotic postwar situations through ending a multitude of social conflicts and culture wars at home.

To be more precise, what was crucial in this metamorphosis was not the Korean War itself, but the perception of it. Today, we might see the Korean War as a limited war in Korea. But, in 1950, and particularly following China’s entry in the fall of 1950, many people across the world viewed it as the beginning of World War III, part of a carefully laid scheme by the Kremlin. It was widely rumored that North Korea’s and China’s attacks have must occurred under Josef Stalin’s orders, that the Soviet Union chose Korea merely as a test, and that there could, or must, be a similar and larger attack impending in Europe. Korea was, in short, a merely a feint operation. Looking back, this view seems quite Euro-centric from the outset. There was a logical leap, as well. Recent studies, including my own book, show that the Kremlin did not really control the Korean War, and that local leaders, such as Kim Il-sung and Mao Zedong, had their own considerations. Nonetheless, such became evident only in hindsight, and was not considered persuasive in 1950. Why not?

The timing itself was significant. World War II ended only five years earlier. For many at the time, World War II was not merely an event in the past. It was, rather, an image of the future, which constrained the ways in which people observed and contemplated the future of the world. Simply put, memories of the war drove many to interpret the Korean War as the beginning of World War III. Against the backdrop of this belief, the moment was conceptualized as a moratorium, a transitional period, before the advent of World War III—the era of the Cold War. In fact, the “reality” of the Cold War attained its highest level of verisimilitude in Europe, East Asia, and the United States, that is, areas that were most fiercely involved in the world war. But it did not achieve such a degree of plausibility, at least at this point, in places, such as Africa and Latin America, which were not principal battlefields of the world war. In brief, the Cold War was based on the fear of World War III, which was constructed in the shadow of World War II. However shared worldwide, the “reality” of the Cold War as a global confrontation was, in essence, a local understanding of the world, a product of social and historical construction. The Korean War, in this sense, was the crucible in the metamorphosis of the Cold War as it provided an indispensable foothold on which the logic of a fantasy Cold War world was built.

What was more significant in the Cold War’s metamorphosis during this period was that, underneath such a Cold War logic, it actually took on an aspect of social warfare on the ground. Take McCarthyism as an example. We usually think of McCarthyism as anti-communist politics in Cold War America—an unusual period of doubt and fear under the extreme atmosphere of the Cold War. However, in perceiving the phenomenon as such, actually we have missed a variety of other local and social suppression that involved racial, labor, and gender tensions in postwar America. In fact, victims during the so-called McCarthy period included not only communists and communist sympathizers, but African Americans and civil right activists, working women and feminist activists, and homosexuals, as well as labor activists and advocates of various New Deal programs such as public housing and universal health care programs. What these groups represented was not necessarily communist ideology but elements of social change that emerged through the experience of World War II. Taking a social point of view, thus, we can pose the following hypothesis: the true nature of McCarthyism, which is often viewed as the Cold War at home, was not really that of anti-communist politics but waves of grassroots conservative backlash under the name of anti-communism, which functioned to pacify social upheavals in postwar America.

When I first noted this point, I realized that it was not only a matter of American history. As a matter of fact, this was the moment when a wave of domestic purges swept across the world: Suppression of counter-revolutionaries in China, the White Terror in Taiwan, the Red Purge in Japan, the crackdown on “un-Filipino” activities in the Philippines, and anti-communist and anti-leftist movements in Western societies, such as anti-labor agitation in the United Kingdom, in addition to McCarthyism in the United States. Conventionally, these events have been examined separately. Yet, there are a number of commonalities. First, all of these societies experienced World War II and went through profound social changes that unleashed a multitude of social, cultural, and political conflicts at home. Second, the outbreak of the Korean War evoked many people’s memories of World War II, producing fear of World War III, which, in turn, created a wartime atmosphere in their societies. Third and finally, in each instance, the Cold War logic proved its utility in tamping down social and cultural conflicts that emerged in the aftermath of World War II in the name of public security.

Taken together, the wave of domestic purges during the Korean War can be seen as a global phenomenon of nativist backlashes—a sort of social conservatism—that operated to contain and silence disagreements in a chaotic postwar world. What becomes clearer is the actuality of social conflicts at home and the imagined nature of the Cold War, as well as the social needs of such an imagined reality to overcome “war” at home. The architects of and participants in this reality were not only power holders in the metropoles but millions of ordinary people all over the world. Hence, the actual divide of the Cold War that emerged during the Korean War existed less between East and West than within each society. In this way, with the war in Korea as a turning point, the Cold War metamorphosed from policymakers’ and intellectuals’ concerns about postwar Europe to an ordinary people’s war at home.

Let us come back to our original question: Why was Korea, and not Berlin, the crucible of the Cold War? The simple answer is that the Cold War gained new characteristics during the Korean War with the change in its stage, actors, and issues in dispute. When we say that Berlin was the crucible of the Cold War, Berlin itself was the stage, a microcosm, of the Cold War, over which powerful policymakers engaged in diplomatic bargaining, maneuvering, and confrontation. The audience outside of Berlin had no role but trembled in suspense. What we can see in Korea was different. The audience no longer quietly sat and watched policymakers’ Cold War drama; they were now participating and making Cold War dramas of their own, with a multitude of locally specific realities. Thus, the stage was not just Korea, itself; the entire auditorium—the world outside Korea, too—now became a stage for the fantasy Cold War world.

Looking back to the existing literature, there is literally no work concentrating on such active roles played by ordinary people in the making of the Cold War world. However, the inclusion of everyday people as part of the analysis has important consequences for how we see the Cold War. It is time to seriously think about changing the ways in which we ask questions about this period. Why did the Cold War world materialize in the early postwar era, particularly during the Korean War? Why did millions of people worldwide join in its formulation and continuation? What were social needs, or everyday politics, of the Cold War? What, after all, was the Cold War? In asking these questions, we can think about broader, social and cultural understandings of the Cold War. Then, we can contemplate new meanings and implications of the Cold War for us today.