Many Cold Wars: Re- conceptualizing the Post-WWII World 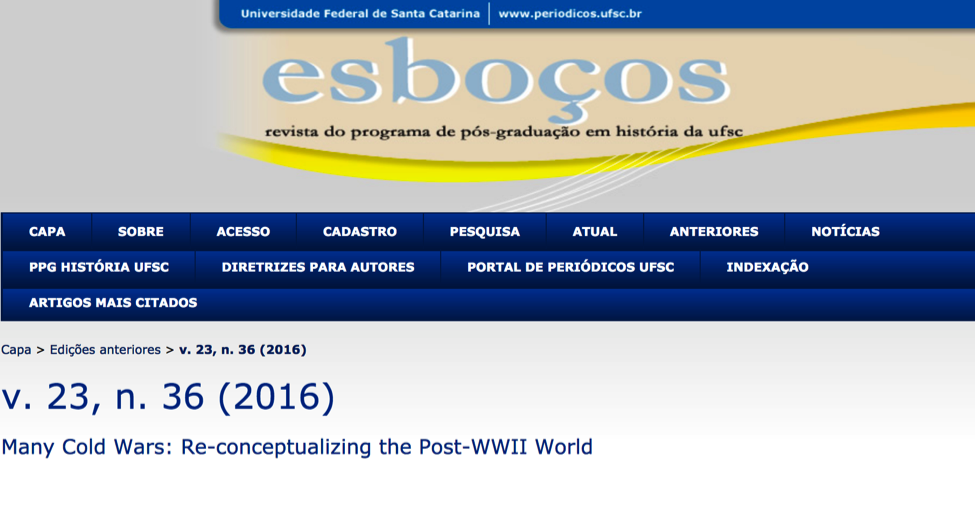 A little more than a quarter of century has passed since the Cold War ended. As the frenzy associated with it now appears odd, if not surreal, the nature of inquiry cannot be the same. It’s time to change our ways of thinking about the Cold War. To this end, we are co-editing a special issue of The Esboços, one of the leading historical magazines in Brazil on “Many Cold Wars: Re-conceptualizing the Post-WWII World.” The key questions we are examining in this edition are as follows: How did local situations contribute to the shaping and maintenance of the Cold War? In what ways did local people utilize, or even take advantage of, Cold War narratives? How can we re-conceptualize the Cold War? How have studies of the Cold War developed in the last two decades, and what possible directions can we explore further? In short, what we are trying to do is to question the standard narrative of the Cold War, shedding light on diverse social conflicts, culture wars, and historical struggles at home that have often been obscured under the Cold War mantle. In doing so, we hope to draw attention to many “Cold Wars,” seen from many different places and diverse points of view, and fought for various purposes in many parts of the world. Ultimately we hope to foster discussions that will question the standard Cold War narrative that prioritizes the US-USSR conflict as the most important current in the history of the second half of the twentieth century. In this special edition, scholars from different parts of the globe analyze diverse aspects of the Cold War. Some articles look into localized or regional conflicts enhanced by the global conflict played out by the two superpowers. Others examine various aspects of the global Cold War, exploring its historical meanings and functions in societies to understand this conflict that lasted for more than four decades.

From Australia, we have three contributions. First, in “The Indonesian Coup and Mass Killings, 1965-1967: A Reconceptualization of the Influence of the Cold War,” Angela Keys and Drew Cottle investigate how Indonesian local situations contributed to the occurrence of two vital and connected Cold War events, the Indonesian coup and massacre. The authors demonstrate how an Indonesian Army General, Suharto, was able to manipulates Cold War narratives to prompt anti-communist fervour, which triggered the massacre of more than half a million supposed “communists.” The authors show that domestic factors were vital to the development of these events, which can be understood as a kind of localized Cold War.

Second, in “Seeing ‘Reds’ in Colombia: Reconsidering the ‘Bogotazo’, 1948,” James Trapani investigates an event known as the Colombian Bogotazo—a series of massive riots that followed the assassination of Liberal leader Jorge Eliécer Gaitán in 1948, which brought Colombia to the verge of civil war. The author points out that the Soviet Union had scant influence on the region prior to the Cuban Revolution, and that the U.S. State Department recognized that the Colombian Bogotazo was not related to the global Cold War. The event involved its own social struggles and local backgrounds, and did not pose any legitimate threat to the region, nor to the United States. Nevertheless, U.S. Secretary of State George Marshall, according to the author, seized the opportunity as a pretext to intervene in Latin American affairs as part of the global Cold War. Trapani contends that similar cases can be seen in other parts of the region, characterizing a pattern of Latin American ‘Cold War’ that resulted in devastating national and regional consequences.

Third, Mitchell Yates and Drew Cottle’s “Conceptualizing Localized Cold Wars in Southern Africa” investigates what its authors call “little Cold Wars” in southern Africa between 1961 to 1989, during which ‘brushfire’ conflicts erupted in the Portuguese colonial territories of Angola and Mozambique, as well as in Rhodesia (and later Zimbabwe), South-West Africa (now Namibia), and the Republic of South Africa. This article intends to reconceptualize the history of the Cold War in southern Africa by demonstrating that, although intrinsically linked, these conflicts constituted not one homogenous conflict but several “little Cold Wars,” and that localized conditions, such as the consequences of colonization and decolonization, as well as racial and ethnic tensions, were the driving forces for conflict, not solely the global East-West ideological confrontation.

From the Ukraine, Viktoria A. Sukovata’s “Soviet Spy Cinema of the Early Cold War in the Context of Soviet Cultural Politics” examines Soviet cultural consciousness during the Cold War, which was echoed in the genre of spy cinema and literature. The article points out that the spy movie was one of the most representative genres of the Cold War period, and shows that this genre emerged and evolved because spy films were expressions of basic cultural notions of the epoch, public fears, and media clichés. In the article, the author closely investigates how images of spies and secret agents transformed Soviet cinema. Sukovata contends that Soviet cinema during the Cold War focused not on nuclear fears, but on the genre of the spy and military detectives because they were more representative of the perceptions of Soviet society of the clash between Soviet and the Western societies. Finally, she argues that Soviet spies and detectives were a metaphorical representation of Soviet intellectuals’ opinions concerning the nature of Soviet authorities.

From Argentina, Fabio Nigra contributes “The Victory Was Also Ideological: The Cold War of Reagan and Hollywood,” which examines the early 1980s, when the conflict with the Soviet Union took on a new impetus following Ronald Reagan’s triumph in the presidential election. The author shows how the new president sought to defeat the enemy by pushing on all fronts, even in the cultural sphere, and how Hollywood, particularly the major studios, collaborated with what was called the “Second Cold War” through producing popular films such as Rambo, Rocky, and Terminator, among many others, which created a new consensus. According to the author, these Hollywood films constructed the image of the abnormally muscular superman, who only with his own efforts could triumph in a situation where the world was against him. The author finds a parallel between this image of a solitary man struggling against the world and the fight of Reagan against the pessimistic atmosphere in his country, showing the power of Hollywood in fighting the Vietnam Syndrome.

From Brazil, Flavio A. Combat contributes “The Centrality of William Appleman Williams’ Thinking in the Historiographical Debate on the Cold War,” discussing the importance of the founder of the Wisconsin School, William Appleman Williams. To Combat, Williams was the first American historian to offer a new interpretation in the late 1950s on the origins and consequences of the Cold War. The author explains the ways in which Williams challenged orthodoxy views through proposing a new interpretation of American society and its interests. The article aims at closely analyzing Williams’ viewpoint, with a particular focus on The Tragedy of American Diplomacy (1959), a masterpiece that summarized his interpretation of U.S. expansionism and its centrality in shaping U.S. foreign policy since the late nineteenth century. In particular, Combat looks into Williams’ “frontier thesis,” the foundation of expansionist U.S. foreign policy, contending that the “tragedy” of U.S. diplomacy in the twentieth century took place precisely as a result of the introjection of the “frontier thesis” in U.S. foreign policy.

Finally, also from Brazil, Sidnei J. Munhoz, contributes “Imperialism and anti-Imperialism, Communism and Anti-Communism during the Cold War,” which explores various regional and local conflicts during the Cold War. In particular, the article examines the ways in which the rise of dozens of new nation-states as a result of anticolonial struggles influenced international relations, impacting the superpowers’ global order projects. The author pays significant attention to regional wars, revolutions, and military coups d’état in the so-called Third World, and argues that, within each bloc, there were many rivalries and disputes among small partners in their search for the consolidation of regional hegemonies, as well as frictions inside of these societies. The article concludes that a cautious examination shows the limits of analysis based only on the bipolar perspective, arguing instead that there was less homogeneity inside of each bloc, where small actors acted in pursuing their own objectives.

As editors of this special issue, we—Sidnei J. Munhoz and Masuda Hajimu—hope that these articles will stimulate scholarly discussions about the Cold War, encourage new perspectives and approaches, and further expand the field to better understand what the Cold War really was.