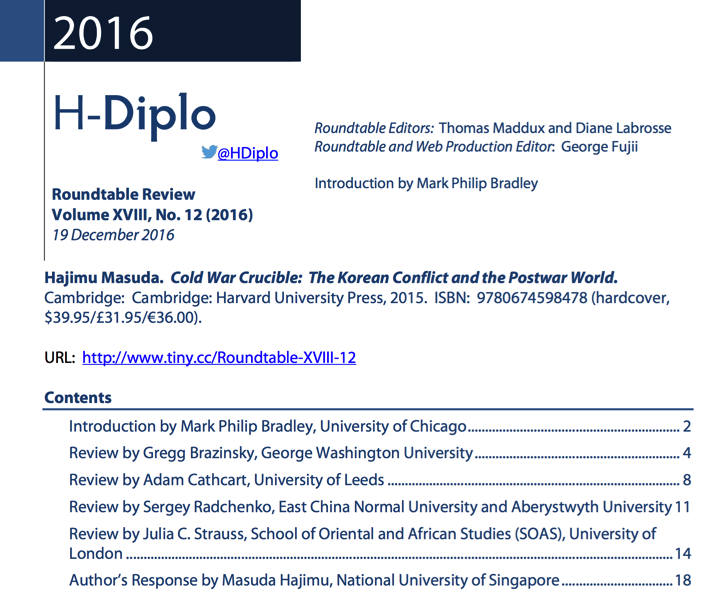 “Masuda’s efforts to simultaneously move between diplomatic and social history and to capture the entanglements of the local and the global across several continents are quite breathtaking, as is his work with primary sources in dozens of archives and libraries in China, Taiwan, Japan, Great Britain and the United States. […]. [The book] should be required reading for all of us in the field, and deserves a central place on undergraduate and graduate syllabi on Cold War history and the international histories of the twentieth century.”

“This is a wonderful book that will certainly be widely quoted and incorporated into a large set of literatures on the Cold War. It manages to do all the things that truly successful academic works must: be enough of its time to be understood and appreciated, be enough ahead of scholarly trends to be far reaching and edgy, be well written and accessible, be based on solid research that will stand the test of time, and perhaps most importantly be on a topic that is large enough and relevant enough that different sub-audiences of scholars will care to read it. In all these respects, Masuda Hajimu hits one right out of the park. […]. No other scholar would have even attempted such a wide ranging monograph backed up with such a range of primary sources. The attention that the book will undoubtedly receive is entirely merited, and its arguments will set the standard for quite some time to come.”

“Masuda Hajimu has written a refreshing, provocative and extremely important book that has contributed not only to our understanding of the Korean War, not even just the Cold War, but the past as a subject of scholarly enquiry. By pushing beyond conventional boundaries, and integrating grass root narratives from many different countries, Masuda has made a big splash in crowded waters, and I congratulate him on this impressive feat.”

“It is undeniable that Masuda’s approach is innovative, original, and path breaking. Using broad, deft brushstrokes, Cold War Crucible repaints our understanding of the origins and meaning of the conflict. Based on extensive archival research in the United States, Great Britain, the People’s Republic of China, and Japan it is a work with an impressive global sweep that ties together the experiences of a diverse array of protagonists, discovering the agency of individuals and groups that had for far too long been overlooked. It skillfully interweaves social, political, and diplomatic history, highlighting the interrelatedness of international geopolitics with the transformation of everyday life. Moreover, many of the insights into how the Cold War came about speak to contemporary international politics—most especially the war against terror—in intriguing ways.”