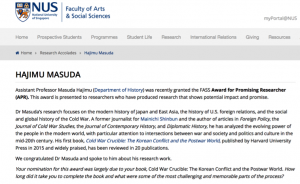 Assistant Professor Masuda Hajimu was recently granted the FASS Award for Promising Researcher (APR). This award is presented to researchers who have produced research that shows potential impact and promise.

Dr. Masuda’s research focuses on the modern history of Japan and East Asia, the history of U.S. foreign relations, and the social and global history of the Cold War. A former journalist for Mainichi Shinbun and the author of articles in Foreign Policy, the Journal of Cold War Studies, the Journal of Contemporary History, and Diplomatic History, he has analyzed the evolving power of the people in the modern world, with particular attention to intersections between war and society and politics and culture in the mid-20th century. His first book, Cold War Crucible: The Korean Conflict and the Postwar World, published by Harvard University Press in 2015 and widely praised, has been reviewed in 20 publications. We congratulated Dr. Masuda and spoke to him about his research work.

Q: Why did you decide to look at the formation of the Cold War in terms of social and diplomatic history and the role of the Korean War in particular?

Masuda: The problem with existing literature is a general tendency toward a particular division of labor among scholars. Diplomatic historians have tended to focus on policymakers’ calculations and personalities, while social and cultural historians have tended to look at the effects of the Cold War on society, culture, and the daily lives of ordinary people. Likewise, Asian specialists have tended to look for elements of the Cold War in Asia, exploring how the global conflict impacted that continent. Of course, these studies have their own merits, but, because of the accumulation of them, we tend to have this impression: policymakers’ conduct shaped the Cold War, which, in turn, had enormous aftereffects on ordinary people’s daily lives, and Asia was an end recipient of the global confrontation.

I consider such a narrative problematic. First, as long as we continue accepting this narrative, we will continue to view society, culture, and ordinary people’s daily lives as passive entities under the global and political conflict, and, thus, we will not think about how they might have conditioned and shaped the ways in which the Cold War was made. Second, as long as we continue to view Asia as a passive, end-recipient of the global confrontation, we will continue to accept this Euro-American centric perspective, and, thus, will not imagine how Asia might have also participated in the making of the Cold War world. That’s why I attempted to synthesize social and diplomatic history, as well as Asian and U.S. history, to rewrite Cold War history, to restart our examination of the Cold War, and, in so doing, ultimately, to reconsider the postwar and postcolonial history of the mid-20th century world.

Q: What were your research methods for investigating the role of ordinary people and small scale local events in contributing to the “reality” of the Cold War? Can you discuss some of your most intriguing findings?

Masuda: What was significant in the Cold War’s metamorphosis during the Korean War period was that, underneath a global Cold War logic, it actually took on an aspect of “social warfare” at home, with active participation of ordinary people: Suppression of Counter-revolutionaries in China, the White Terror in Taiwan, the Red Purge in Japan, the crackdown on “un-Filipino” activities in the Philippines, and anti-communist and anti-leftist movements in Western societies, such as anti-labor agitation in the United Kingdom and McCarthyism in the United States. Conventionally, these events have been considered the global Cold War’s aftereffects, and have been examined separately.

However, in looking at these events, I was taken aback in seeing how ordinary people actively and quite enthusiastically took part in and used Cold War logic to contain diverse social disagreements and culture wars at home, thus, effectively transforming policymakers’ diplomatic stand-off into an ordinary people’s war at home. That’s why my book re-defines these events as parts of a global phenomenon of nativist backlashes—a sort of social conservative suppression—that operated to silence various disagreements that surfaced in the aftermath of World War II.

Thus, one of the most intriguing findings was that the actual divides of the Cold War existed not necessarily between the Eastern and Western blocs but within each society, with each, in turn, requiring the perpetuation of such an imagined reality to restore and maintain social order and harmony at home. So, perhaps, the Cold War was more than a rivalry among superpowers at the international level. My book suggests that it could be better understood as an imagined reality that took on the role of social tranquilizer, pacifying various disagreements in the aftermath of World War II.

Q: How do you foresee your re-interpretation of the materialization of the Cold War world being incorporated in other areas of research, historical and otherwise?

Masuda: In terms of scholarly implications, I think my approach could open up new lines of inquiries and discussions as to the reconsideration of postwar and postcolonial histories, in general. What I have tried to do in my book is, in a sense, to relativize the importance of the Cold War narrative in mid-20th century history, and look at locally specific realities underneath the mantle of the Cold War. While only a handful of cases can be discussed in one book, such “unlearning” of Cold War narratives might help us to shed new light on other regions’ and countries’ histories that have been similarly viewed through the Cold War lens, including, for instance, France and Italy, Greece and Iran, Kenya and South Africa, Thailand and Vietnam, and Guatemala and Mexico, as well as the Soviet Union.

In a much broader sense, what I have been problematizing is the imagined and constructed nature of “reality” and “history,” and their functions in society in erecting sorts of “walls” among people and within communities, which operated to clarify lines between “us” and “them.” Once we take off the Cold War lens and re-examine what the Cold War really was, we should be better equipped to see the imagined and constructed nature of our walls, reality, and history, today. I hope that such a recognition would help us to raise questions concerning stereotypical narratives about our world that tend to simplify complex stories and prevent us from thinking further.